What a day it was at Watergate Bay; four teams competed for the illustrious title of Sandball Champions. Players varied in experience so a member of NHC captained each of the teams, which included local people wanting to try the game and sporty beach dwellers on the day.

In the build up to the tournament, the news spread far and wide. This attracted the attention of Handball superstar Aden Woodall (pictured below) from 2012 national Super 8 champions, Salford. 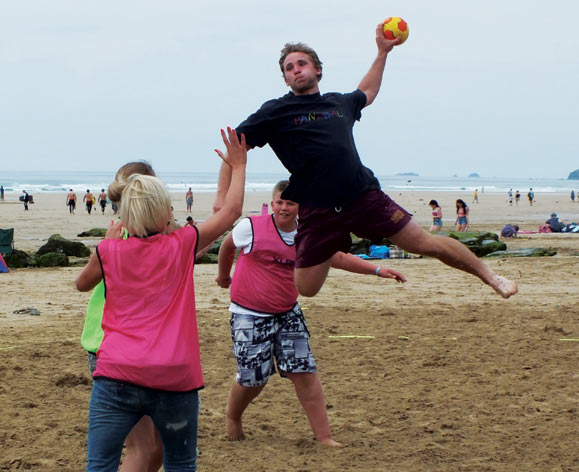 Sandball is a fast, furious and fun sport to play, but it’s great for spectators too because at the heart of Sandball lies showboating. Extra points are awarded for goals involving 360 spins, flips, tricks and any other extravagance. Aden lead the way, scoring a from multitude of physics-defying positions. He is proof of the potential for Handball when proper equipment and great coaching is available. Newquay has the latter in the form of Jürgen Koenen, the former is work in progress.

The tournament consisted of a group stage, followed by a 3rd/4th playoff, then the final. The group stages proved a hard fought and tight affair. Lee Springlett lead his team to the top of the group, after producing a penalty shootout victory over Geoff Muskett’s team. Third place in the group went to Team Adolf, fourth to Team Eddie.

This result meant that the 3rd/4th playoff was contested by Team Adolf and Team Eddie (pictured below). With little between the sides, Team Adolf took the first half 6-4, with Team Eddie striking back in the second 9-7. In Beach Handball when a team wins a half they receive 1 point, so this ended a draw, 1-a-piece. However Sandball is a sport that loves a winner; a penalty shootout soon distinguished the third place team. High quality finishing took the score to 3-3 with Eddie’s penalty next. In true Sandball fashion he unleashed a barrel shot, going for a 2 pointer to finish the game. Make or break. The ball struck the post, giving Team Adolf third place.

Final time, and a rematch of the last group stage game – Team Geoff versus Team Lee. Team Geoff (pic below) and their fans were out for revenge; and they didn’t disappoint. They took the first half 10-6 and the second 9-6, meaning a 2-0 victory and the title of Sandball 2013 champions!

After the tournament it was the over to the kids who had waited patiently, taking in the rules and showboating ethos demonstrated in the main competition.

Two games were played out with 18 children aged from 5 to 14 taking part. The sheer enthusiasm for the sport was obvious to see as the kids were pulling out 360’s, spins, twists and commando rolls.

Inspired by the excitement and energy of the kids game, Newquay Handball Club are planning to run sessions for youngsters from September. Email Geoff at info@newquayhandballclub.co.uk for more information.

NHC are looking to join the South and West Development league which is due to start in October. However they need players! Join us to be on the forefront of a new wave of Sport in Cornwall.

Newquay Handball Club run regular beach training sessions every Thursday night which are open to anyone over 16, no experience necessary. This will continue over the summer until the light is against us, at which time we will return to a sports hall for the winder months. Sessions start at 7pm and cost just £2 per person. Check newquayhandballclub.co.uk, Newqhay Handball Club on Facebook, @newquayHandball on Twitter, for more information.

Newquay Handball Club would like to thank our kind sponsors of Sandball 2013; Plumbase for supplying equipment for the goals, Worlds Apart for supplying the T-shirts, The Print Environment for printing the banners, the Lighthouse Cinema for their sponsorship, the Extreme Academy for allowing us to take over part of the beach, and Leafhoppers for their continued support of the club. Sandball 2013 could not have happened without the support from these local companies – its great to receive contributions even through a tough economic climate